Mercy Reef or Aquaman is a television pilot developed by Smallville creators Al Gough and Miles Millar for The WB Television Network, based on the DC Comics character of the same name. Gough and Miller wrote the pilot, which was directed by Greg Beeman. Justin Hartley starred as Arthur "A.C." Curry, a young man living in a beachside community in the Florida Keys who learns about his powers and destiny as the Prince of Atlantis.

The Aquaman pilot was expected to debut in the fall schedule of 2006, but following the merger of the WB and UPN, the resulting CW Network opted not to buy the series. After they passed on the pilot, it was made available online through iTunes in the United States and became the number-one most downloaded television show on iTunes. It received generally favorable reviews and was later released on other online markets, and aired on Canadian television network YTV.

A.C. and his mother Atlanna are flying over the Bermuda Triangle. As they get closer, Atlanna's necklace begins to glow and a surge of light and energy erupts from the ocean, causing cyclones which bring their plane down. Atlanna is kidnapped by a siren, but not before giving A.C. her necklace and calling him Orin. Ten years later, A.C. is charged for releasing dolphins from a marine park. His father bails him out of trouble, but gives him a stern lecture on responsibility. Later, A.C. tells his friend Eva that he felt like the dolphins were calling to him. While he's working, he is approached by a lighthouse keeper who identifies himself as McCaffery. The Coast Guard picks up an unidentified man, floating in the Bermuda Triangle and pleading to warn Orin. Lt. Torres is sent to investigate the area. A.C. is also at the Triangle, and his necklace triggers another surge of light, which causes Torres to crash her jet. Brigman transports the John Doe to another facility, and persuades Torres to join his team. Brigman is looking for a connection between the disappearances of thousands of individuals, and their reappearance years later without ever aging a day.

That evening, A.C. meets Nadia and she convinces him to go swimming. In the water, Nadia reveals herself to not only be a Siren, but the one that took his mother. A.C. barely escapes with a little help from McCaffery. McCaffery explains that he, Arthur and Arthur's mother were all exiles from Atlantis, and that A.C. is the prince of Atlantis. Arthur convinces Eva to leave Tempest Key for a few days, but it comes too late as Nadia injures Eva and captures Arthur. When he wakes up, A.C. finds that Nadia has also captured McCaffery and she is bringing them both back to Atlantis to be executed. Breaking free using a flask of water to enhance his strength, A.C. destroys Nadia by putting a spear through her head. The next morning, McCaffery explains that there will be more creatures that will come looking for A.C. and that he should have started his training years prior. A.C. agrees to start his training, and McCaffery leaves him with Henry IV Part 1 and Part 2 to read. McCaffery informs Arthur, who isn't too keen on having to read the books, "It isn't about the ending, it's about the journey."

Ideas for future episodes focused on environmental threats, such as "ocean polluters" and "evil oil companies." The first 13 episodes already planned out, with a possible story arc involving McCaffery being captured and taken back to Atlantis. Stories regarding mythology were set to play a small role in later episodes. Gough and Millar chose to go with a more classic version, from the comics, of Aquaman's mythology. Gough stated, "Unlike Superman, there really isn’t a set core mythology for Arthur Curry. There are a couple different versions of it. We went with the most classic one." 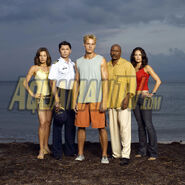 Add a photo to this gallery

Retrieved from "https://aquaman.fandom.com/wiki/Aquaman_(TV_program)?oldid=13878"
Community content is available under CC-BY-SA unless otherwise noted.